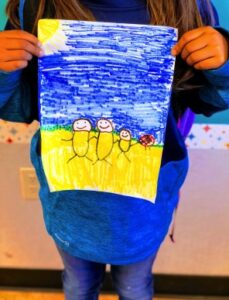 She was sitting quietly legs crossed Indian-style hands on her lap her light brown silky hair draped down like curtains on each side of her ears and as she listened to the story her face started to look sad. Sarah continued to share Philip’s story to the class– a story about a 3rd grade student who was excluded by his peers. Each time Philip, the beach ball, was left out or picked on by other students he lost a bit of air until eventually he did not have enough air left in him to bounce. Later students get an opportunity to help fill-up Philip with happiness by sharing what they could do to encourage someone who is being left out. Students always marvel at this story and they seem to build a special relationship to Philip, the beach ball. I have witnessed how all over schools in Salinas and Monterey County, Philip has become quite famous and loved. On this particular classroom meeting Philip was the perfect catalyst to help a special student process her feelings.

“Was there ever a time when, just like Philip you have felt left out, Sarah asked?” Multiple little 3rd grade hands flew up in the air to share their stories and one by one they all perfectly told of a time when they were left out and of a time when another student was mean to them. When it got to her turn she reached towards the side of her ribs and she shared about a time her little brother kicked her while they were jumping on the trampoline. After sharing her story she continued to sit quietly and I observed as her body language shifted she placed both hands on her cheeks and dropped her head and began staring down at the carpet. Before ending the classroom meeting I asked if any students needed more support I looked directly at her to make eye contact. She looked back at me with teary eyes but did not say word.

As students began to make their way back to their desks I went up to her and asked if she was okay. She shook her head no and began to cry uncontrollably. I asked if she was being left out or bullied. She replied no. I took the student outside and asked her what was wrong and there she shared that her grandpa had just passed away, and the funeral had taken place just over the weekend and two days before her birthday. Crying she continued to share that she was her grandpa’s gift when she was born. Sarah joined us and offered for us to walk with her to the office where she could sit for a bit. As we walked she shared that her grandpa always stood up for her and included her when she was feeling sad and left out, and to make her feel better he would take her to places and buy her ice cream. I was astonished to observe how this classroom exercise had helped her make the association to the role her grandpa had played in her life.

“What do you like to do when you’re feeling sad, Sarah asked?”  She replied that she likes to paint and draw. So we took her to a room in the office so she could do exactly that. She began her sketch and rested her head on the desk and although sad she wasn’t crying anymore. I sat next to her and began coloring along side of her my own little drawing– a card I would later give to her. She pulled out numerous colors but mainly used yellow, her favorite color, and after her portrait began to take shape Sarah asked her who was in the picture. She pointed at her grandpa and his garden, she pointed at her brother and herself, and finally she pointed at a red round object holding her hand and said, “and that’s Philip.” Philip the beach ball had made it into her portrait and what a special moment that was.

If a beach ball can impact a student’s life so drastically imagine what a caring adult can do?